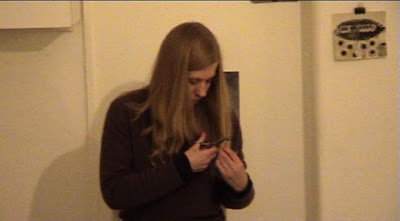 For the private view of DUST I gave a Haircutting Performance.

The performance was unnanounced, taking place in the living room of Hovel, amidst the exhibition.

From the DUST Table Collection I removed a reel of white cotton, a pair of hairdressing scissors and a pile of tiny brown envelopes. I then pulled forward the chair, which was against the wall. I sat, in silence, and put the envelopes on the floor to my right, the thread and scissors on my lap. I then separated a lock of hair from my head, took the scissors and cut it off. I bound the end of the lock of hair with thread, and tied it. I leant forward, picked up an envelope from the pile, and placed the lock inside it; licked and sealed the envelope. I then placed it to my left, on the floor. I repeated this process, cutting locks from my hair and placing them in an envelope, forming a pile of filled envelopes. The process was slow and laborious; it was unclear how long it would take to complete the task. From time to time I shuffled through the filled envelopes, counting and neatening the pile. The people present watched in silence and stillness. The sound from two films in the exhibition played, repeating; sounding like waves, water, or sometimes trains. When I had cut enough hair locks to create a substantial pile of envelopes, and consequently had altered the appearance of my hair, I counted through the filled envelopes. I put down the cotton thread, scissors and unused envelopes, rose from the chair, then gave an envelope containing a lock of my hair to each person in the room.

Here are some still frames from a film of the performance. 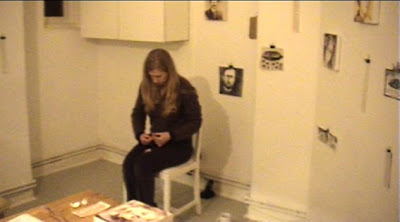 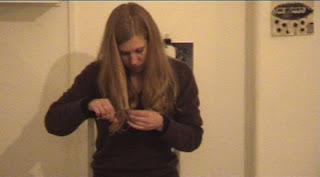 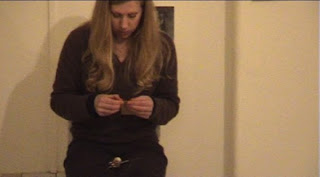 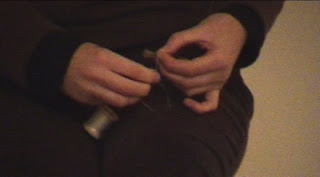 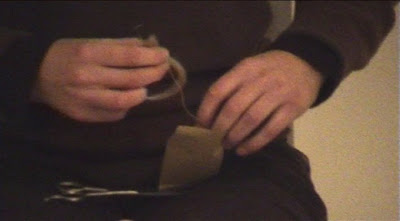