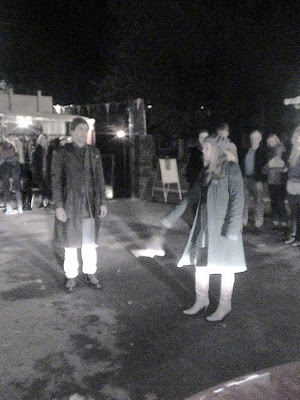 On Saturday 13th November I did a Silent Bell Ringing performance with Marc Vaulbert de Chantilly. The piece was devised for ‘Remembrance,’ a day of performance at Bitchwedge Gallery in response to Remembrance Sunday. Memory and loss are recurrent themes in my work, and in the days before the performance, which Marco had been invited to do, I had returned to a text I wrote after listening to the two minutes silence on Radio 3 last year. My writing observed my struggle to identify silence and to comprehend or accept the process of memory I was being presented with. When Marco asked me to collaborate with him on the Remembrance piece, knowing he had recently bought a bell – a beautiful, old, heavy, mottled metal bell – I suggested we perform a silent bell ringing. Marco added that we could muffle the bell’s clapper with a handkerchief, and we decided I would ‘ring’ the modified bell for two minutes, in a silent bell ringing, while he watched in stillness.

Both my and Marco’s work is concerned, at times, with endurance and repetition, often through physical movement/non-movement, e.g. crawling, staring, sitting. This was our first collaboration, and it brought together some of these interests, along with ideas of memory, memorialization and loss. The elements of the performance emerged spontaneously and naturally, embedding the work in a space of personal resonance. On the morning of the performance we searched for a suitable handkerchief in my flat, finding only two unsuitable ones. A patterned silk one which I had bought at Brompton Cemetery, in a jumble sale, and a white cotton one I was intending to embroider for my grandmother, but on which I had so far only stitched the ‘G’, the rest of her name being written in pencil only. Both were too laden with particularity of association. We cycled to Marco’s flat to collect his studio keys, and on arriving there, I noticed a white cotton handkerchief hanging from the fence by the front door. I pointed to it, and Marco lifted it from its seemingly carefully placed position. We examined the monogram in one corner, discovering it to be a ‘G.’ We then cycled to Dalston, to Marco’s studio, to collect the bell and briefly rehearse our performance.

It was now dark and we needed to hurry, to get to the gallery by ten to six, in order to do our performance at the last minute, before it closed at six. We cycled through Dalston, quick-ish, past the end of Ridley Road Market, with the bell hung from Marco’s bike. It rang intermittently, or rather he rang it, and sometimes it rang itself or bashed his leg, or overbalanced him, particularly on corners. The bell is weighty, loud, sonorous with a high pitch, which cut through the darkness. People on the streets turned to look at the sound. As I cycled behind Marco and the bell, listening and watching, I saw the journey as a procession. I felt like an envoy, a messenger, a ghost.

We arrived outside Netil Market, a small, wall enclosed space at the south end of London Fields. I had never been before. We chained our bikes in the street and carried off the bell. Bitchwedge gallery is a market stall, amongst the other stalls, containing chairs and a heater. When we arrived, just before six, most stalls had packed up, or were in the process of doing so. There were few people around, it was dark and quiet, with a feeling of calm ending. After a few moments, Geraldine Ryan, whose gallery it is, announced our performance and we began.

I held the bell, by a blue rope handle, in my right hand. I walked into the centre of the market place and stood still. It was dark, cold and quiet-ish. A few stalls and customers lingered nearby, with remnants of busy-ness. Marco walked towards me, stopped, and looked into my eyes. He drew from his pocket a white monogrammed handkerchief, knelt before me and began to tie it around the bell’s clapper. I grasped the bell in both hands, tilting it forwards and slightly upwards to expose the inside. I had a sense of physical intimacy through this gesture, of the bell as an almost organ-like or gynaecological space, connecting us in this ‘operation.’ As Marco delicately tied on the handkerchief – a process which I could not see – I thought of the dressing of wounds, and the (myth?) of tying a knot in one’s handkerchief in order to remember something, and of the white handkerchief of surrender. When Marco had finished binding the clapper he rose to his feet, again looked into my eyes, then stepped back and stood still.

I began to swing the bell, making a long arc forward, then back, to move the weighty bell through the air. I articulated my whole body through the bell’s movement, bending my knee, pushing my hip, raising and extending my arm to lift the bell high, then letting its weight pull my arm down again, forcing it behind me in a long arc. I repeated this movement again and again rhythmically, forcefully. The bell did not ring. People in the market stopped to watch and listen to the non-sound. Occasionally a gasp of sound broke from the bell, as some less muffled chink of clapper struck at the bell’s body.

As I swung the bell I felt it as a part of my body, both controlled by me and controlling me. I counted the strokes, impelled to the iteration. The bell dragged on my shoulder. I grew tired, and wondered how long I had been ‘ringing,’ when the two minutes would be up, or if Marco would abandon our plan of a ‘sign’ after two minutes, and hold me here longer, silently ringing till I could continue no more and was exhausted. I felt outside of time, like a cipher, a-historical. I was a clock that did not move forward.

After seventy two strokes I glanced to Marco. He was standing motionless, erect, staring straight at me. He had stood this way throughout the silent ringing, a sentry, a guard. A witness to absence, to almost-silence. Watching stillness-in-motion – my arm’s pendulum movement, repeating, my feet rooted to the ground, the un-clanging-clapper flinging against the bell chamber, the market place of drifting, noise, activity, continuation of routine, ending. Marco stepped back, the sign that two minutes had passed, and I allowed my arm to relinquish the force of ‘ringing,’ and become still. 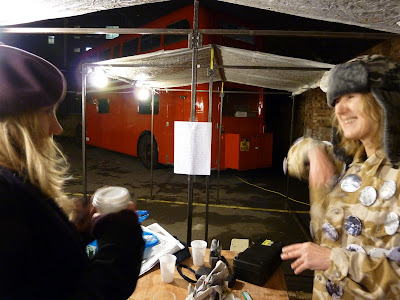 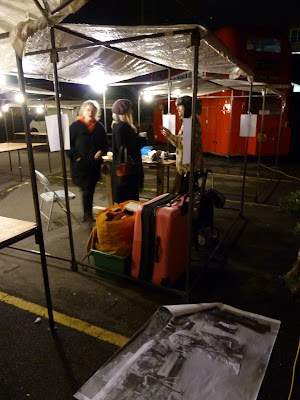 Here is the text which I had been pondering prior to the performance - it's an extract from my book 'Body':

Last year I decided to listen to the two minutes silence broadcast on Remembrance Sunday on Radio Three. I heard the chimes of Big Ben at eleven am and then a kind of silence ensued – but it was silence with sounds; sounds like breathing, rustling, and faint echoes, as in the interior of a church where people are actively being silent. I assumed this was the silence. Once I had identified the moment of silence, the beginning of it, my experience was then of an ambiguity over what exactly to do; of how to conduct my silence. The radio announcer had stated that there would now be ‘two minutes silence in remembrance of all those who lost their lives in the first and second world war’…or was it in all conflicts..? Without further instructions I wondered should I try to remember, to recall, specific people, historical people and their actions? or a generalized idea of those people? Should I conjure loss, in an abstracted sense, or perhaps in a personalized way? Or should I imagine the times in which historical loss occurred, its scenes, the conflicts out of which it arose? Should I recall people I have known who fought in war, though they survived? Or should I experience the silence, the emptiness, the absence of sound, the pause of activity? is the intended idea that my two minutes of silence should be an awareness of emptiness, loss and absence?

After this silence – this mentally noisy silence, these few moments elongated by super-awareness of noise and movement and expectation - there were guns, then music. I felt then, at the arrival of these ritual noises, that the time had been so short it could not possibly have been two minutes; it must not have been the silence after all, but just a prelude in the programme; and the silence was still to come. So I listened on, waiting carefully for the real silence. Eventually the radio station resumed its music programme, leaving the Remembrance Service; it was clear then that I had indeed heard the silence as I thought originally. I had spent my silence wondering how to do it, what it was or was supposed to be. Silence sounds.

Kate Kotcheff made a wonderful Remembrance Balaclava for her performance at Bitchwedge Gallery. It reminded me of a couple of my 'Balaclava Women' Rizla Drawings. You can see more of my Balaclava Women drawings here, on some of my older posts. 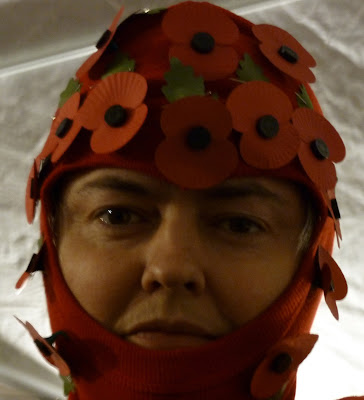 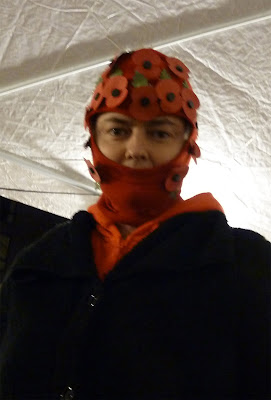 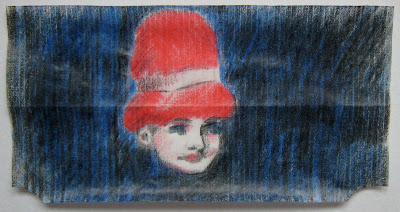 Posted by Gail Burton at 21:43 5 comments: Links to this post