On Saturday 11th September 2010 I performed a ritual of reading, digging and burying. The performance took place in Queen’s Wood, London, as part of ‘Cut Back,’ an exhibition of site specific and performance art. 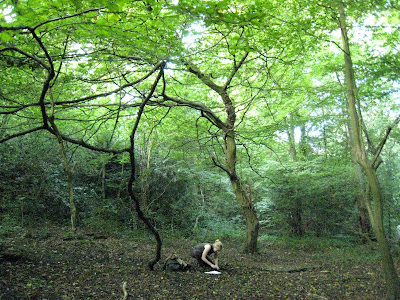 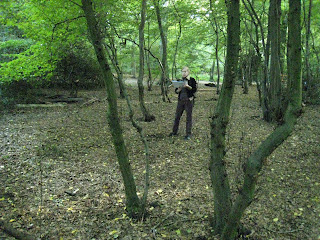 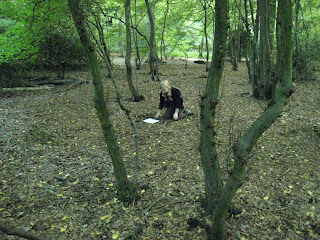 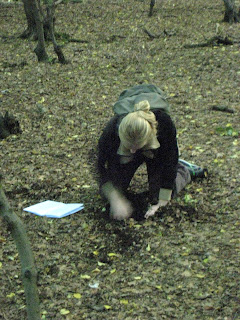 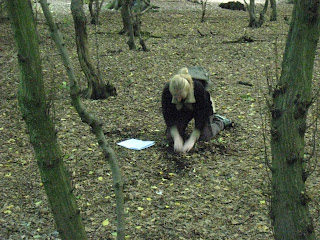 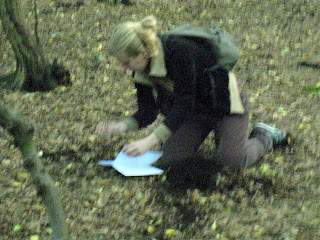 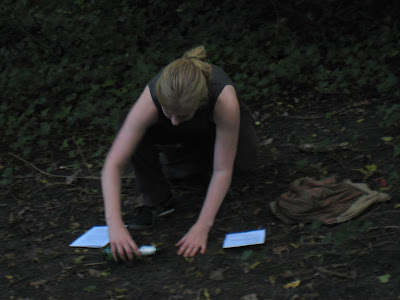 At 5pm I began the ritual, starting in the main clearing of the wood. I walked out of the clearing followed by a small group of people. I walked slowly but purposefully to discover the first site where I would dig. I took with me a pamphlet which I had made - A pamphlet of extracts from ‘Body’ A Book about the Traces and Manifestations of Time, Memory and Loss. It contained a selection of texts from my book, Body, which I had chosen specially for the digging performance.

Queen’s Wood is covered by a thick spread of tall, mature trees, as well as shorter scrubbier bushes and foliage. The ground is therefore mostly plant-less soil, topped with tree debris or sprinkles of grass. It has denser more impenetrable areas of shrubbery and trees, as well as more stately or preened areas. It is criss-crossed with managed tarmacced paths, as well as foot worn paths made by human traversal.

I chose a spot of ground beneath a canopy of large trees. The ground at this first spot had a light surface covering of shards of bark – I tested it with my toe to see how hard the surface was. I read aloud from the first page of my pamphlet – the passages were Re-Use, The Other Jonah and the Real Marion, Eveline Wesson, and A Solid Piece of Geography. I read volubly, looking at the page, and only occasionally glancing to catch a glimpse of whether anyone was listening or standing nearby. I had the sense of being watched. A small group of people stood close to me, quietly listening and watching. At the end of the passage of text I bent down to the ground, crouching, then kneeling, and began to dig with my bare hands. I scraped into the soil, which was cool and moist. After a few scrapings the black soil was pushed deep under the plates of my nails. I continued digging until I had created a shallow hole. Then, I tore off the first page of the pamphlet, from which I had just read; I folded it twice and placed it in the hole. I then covered over the hole and formed a small mound on the site with the loose earth. Excavated earth never exactly fits back into the hole from which it came; it always has a slightly larger volume. Thus I was able to create a marking mound on the site of the buried page of text, to which I added a few leaves and a small stick, stuck upright on the top, to mark the spot. On leaving the place, the mound became almost invisible amongst the wood’s floor.


Reading and digging at the first site...

From the first site I progressed further along a path, then veered off into a copse covered by a lighter canopy of trees, an area less walked through, and requiring deliberate action to access. Again, I stopped. I had found a place next to a large stone slab laid flat in the ground. It was like an oversized and industrial gravestone, but blank faced. I read passages from the next page – Boab’s Nutrients, Geologies, I Am, Chips And Ham, Punishment, Dust Tea, A Sign, The Dust Destructor, O, Portents and Coming. I stooped, crouched and dug. The soil pushed hard under my nails. Every site had a slightly different texture, and at this one I encountered tendrils of tree roots, which ripped pleasingly as I scraped downwards. The group of people watched silently as I found my way through the soil, noticing as I picked out small obstacles, such as a shard of broken pottery, and a still wriggling worm. My knees were now muddy, though imperceptibly so as I was wearing brown corduroy trousers. The remaining pages of the pamphlet were smeared with soil.

I continued through this off-the path part of the wood, leading the group through a scrubby bit which had the sense of being behind the paths which circled the clumps of woodland. The wood is hilly in all directions, with continual ups and downs. We now went up the hillside and I struggled to find a suitable next location. I wondered who might be following me, and what the threshold of their interest or boredom might be. I caught glimpses of their figures and faces. They followed at a slight distance, catching glimpses of me amongst and between and behind bushes and groups of trees. Ahead were traces of other artists’ site specific work – sheets of paper hung from trees with names, glowing white in the near-evening wood-gloom; a washing line of grey ‘smalls’, and the strain of George Formby. These slightly absurd additions to the context drew me to cross a path and over into a densely darkly wooded area with a musty smell, where the music could be just heard. The next text, about my Grandmother, felt it could sit easily with these oddities. I crouched facing downhill where the group were standing. They had listened attentively as I spoke of my Grandmother and her ‘Penelopes.’ I scraped away with increasing frenzy at the somewhat hard ground, trying to reach a deeper layer. I was a small and furtive figure, intent and labouring. Passersby who did not know of the performance, but were simply encountering us upon their walk, paused on hearing fragments of declamatory text, carried on the wind; or at the sight of a small group of stock-still watchers in a section of wood away from the path, their eyes then drawn to a crouching scrabbling figure. 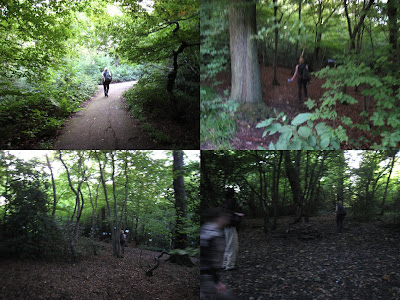 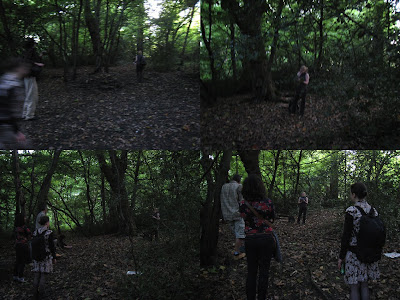 As the number of digging sites increased the pages of the pamphlet diminished, until its pages were held together only by by a loosened thread of white cotton - the spine’s stitching - now coming free like a crochet edging, leaving the book like fragile dry leaves, or fancy lace doilies. But smeared with dirt. 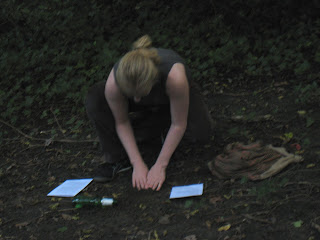 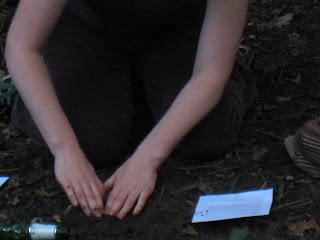 I continued, repeating this process of walking and searching, moving through the woods, looking for suitable digging and burial sites, with the small trail of people following me at a slight distance. We were glimpsed by others, and glimpsed each other through branches, foliage and tree trunks; part obscured by these objects and by the shifting patches of sparkling evening light, and encroaching darkness. Though the evening grew darker, it remained warm; and the digging made me warmer. After the first couple of diggings I had removed my jacket, down to a sleeveless top, and as I dug in the crepuscular light my flesh could be seen to glow white, contrasting with the darkness of the tree branches and earth; a busy spectral creature. 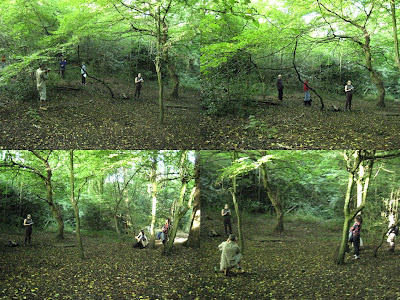 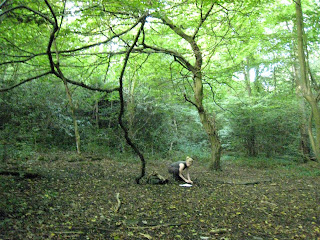 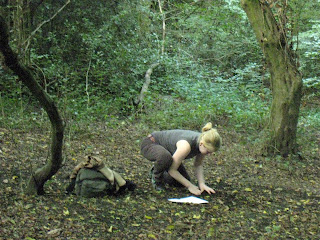 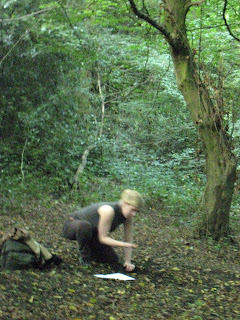 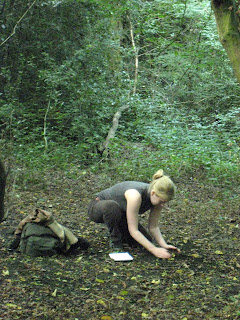 Finally, after seven sites of reading, digging and burying, taking an hour, the entire pamphlet was committed to the soil, covered over and the performance ended. 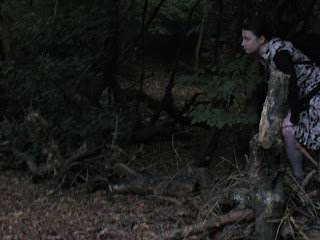 My readings spoke of incidents with my Grandmother and her dementia, thoughts of my mother summoned by dust in an old library book, histories of dirt, waste and power generation, idiosyncrasies of funerary practices and architectural embodiments of time. Each page of fragments was staged in its own dell or copse or canopied segment of wood, with particular acoustics, fragrances and phenomena of light. The woods had a mushroomy smell, clearly perceptible on passing fungussy growths. The trees provided privacy and cover; the meandering walk into the woods and away from the fixed paths converged privacy with intimacy and potential uneasiness and resonances of danger – further from safety and known pathways, uncertain routes, obscured visibility. The audience placed trust in the ritual, tramping into unknown and muddy, obscure sections of the wood. The text mingled with these places and processes, resonating and finding anchor points. An unfixed, de-limited environment within which to speak and listen, for words to be heard, or missed. Thoughts of ‘the trace,’ ‘the fragment,’ memory, uncertainty, repetition, revision, the obscure (of vision and recall), loss and remains were manifested in the treatment of the text – torn, buried, dirtied, read – and the procession through the woods. Subjecting words to a physical process – of burial, of looking, walking, staging – imparted something of the physicality and experiential history from which they were inspired. The intimacy and absurdity of the repeated digging, the physical effort at something so small, feral, and odd, its furtive quality witnessed through tree branches in half-light, conjured ideas of the darkness and desperation of memory, its struggles and uncertainties, its losses or lacunae. And, more simply, was a set of actions: private, imperative, obscure, using the body as a tool, in direct connection with dirt, in the subversive act of engaging with soil, rooting, rummaging, picking over, secreting. Even in this natural and rarified dirt, environment of animal foraging, traces of the human were ever present – shards of broken glass mixed with soil reminded me that people were here – remembering the performance my mind turns to thoughts of the Victorian dust heap and its coterie of workers, sorting, searching, categorising its contents; and their modern day descendants, rustling, scraping, seeking in the night through the bins and skips of the East End. 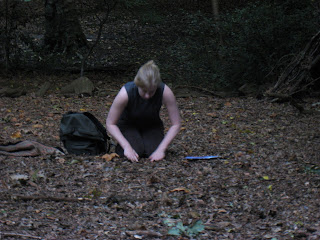 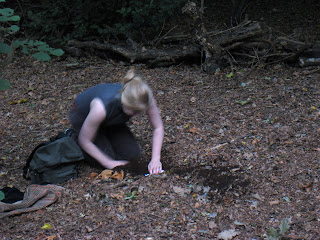 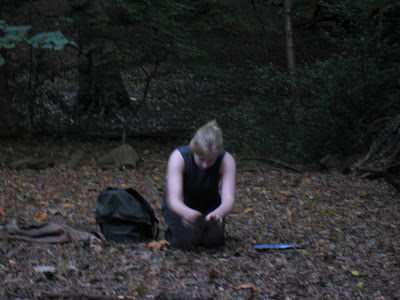 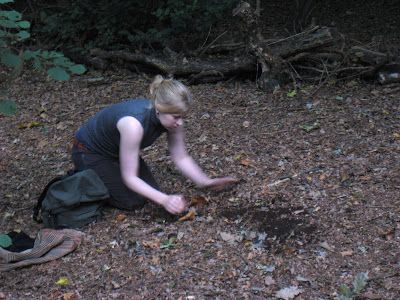