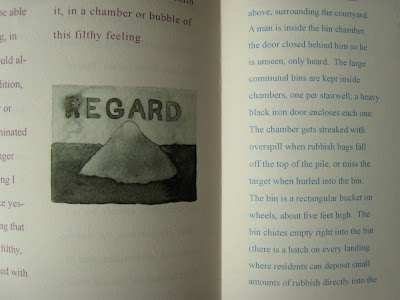 I will be taking part in the Artists' Books and Independent Publishing Fair, at The New Art Gallery Walsall on Saturday 22nd and Sunday 23rd May 2010, where you can see the 2nd edition of 'Dust Pamphlet.'

'Dust Pamphlet' contains a sequence of short texts about the ‘bin scavengers’ and other stories of filth from my observations. The text is interspersed with illustrations, from my original ink and watercolour drawings, including ‘the heap’ and imagery inspired by mourning jewellery. The pamphlet interlaces ideas of the Victorian dust heap, dirt and searching to reflect on memorialisation and loss.

I created 'Dust Pamphlet' as part of a residency and exhibition, also entitled Dust, at Hovel in November 2009 (see previous posts, below). After an encouraging response to my hand-stitched first edition I decided to produce a second edition in 2010. The new Dust will be published by Site Projects on 21st May, ISBN 978-0-9554379-6-0. 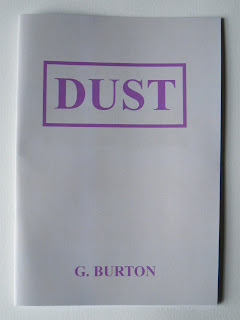 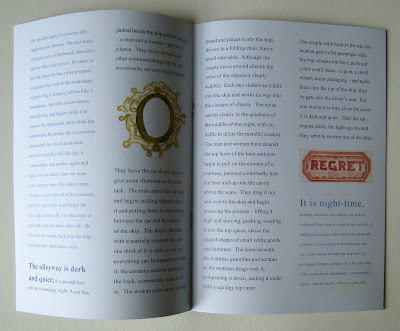 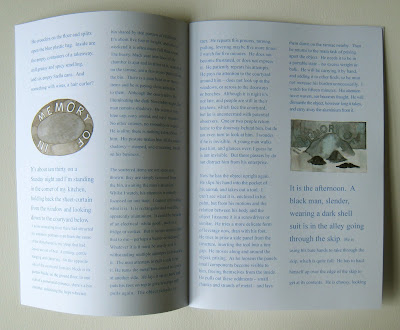 Malcolm McLaren Only Died Once 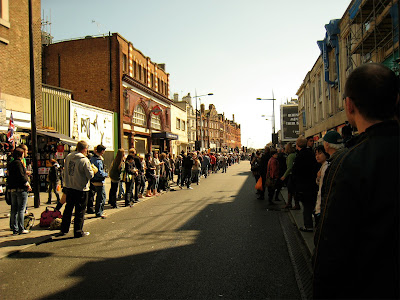 I heard on the radio in the morning on the 22nd of April that it was Malcolm McLaren's funeral later that afternoon, and that the public were invited to attend his funeral procession. I looked on the internet to confirm the route - the funeral cortege would pass through Camden at 1.15 and then continue up Chalk Farm road and wend its way to Highgate Cemetery. The given route didn't exactly make sense in its detail when I followed it on my A to Z, and I thought maybe that uncertainty was a deliberate anarchic action. Perhaps the funeral procession would not take this route at all? However, in the miserable mood I had been in recently I decided that a day out to Malcolm McLaren's funeral would be just what I needed. The weather was sunny, and after some procrastination about whether my bike would be a hindrance once I arrived in Camden, I decided to go, via cycle.

My interest in the event came partly from my enduring love of punk, the history of which McLaren is indelibly written into. But his financial exploitation of The Sex Pistols gave me reservations. Perhaps because of rather than despite this ambiguity I was drawn to the event - to witness McLaren's ambiguous role as arch-manipulator/exploiter/creator in his final action. I was intrigued to see how his Situationist and punk ideas would manifest, how his media manipulations and constructions would operate even in death. On the morning of the funeral I began to think about his Situationist inspirations, and the proposition of a funereal derive inserted into my bleak-looking day became appealing. This impetus overlapped with my fascination for Victorian commemorative tissues, many of which document funeral processions, or other ritual public processions. Through reading the text on those mementos I have learned the intricate and long forgotten details of itineries and routes of distant public events. These commemorations inscribed memory and mourning on the streets of London, in ephemeral passages through the streets, remembered today only on fragmentary tissue prints. Malcolm McLaren's funeral procession seemed to me an incarnartion of this Victoriana, and of a piece with his Dickensian posturing. A final intervention in the lives of the public/audience/media and representation of himself.

I cycled to Camden, and arrived at one pm. As it neared two pm, and the streets were thick with mourners, I wondered whether it was a final hoax or scam - the funeral was somewhere else; he wasn't actually dead. Yet I also felt sadness, knowing that he was dead, and a horrible and relatively early death. I was glad that there was a decent turn out to mark his passing. At about two-twenty cheers began and the first vehicle of the funeral procession came into sight. Several long black cars, followed by one whose windows were filled with a floral tribute, a blue flower background with white flower text proclaiming CASH FROM CHAOS. Next a traditional horse drawn hearse, with two black plumed beasts, and clearly visible in the carriage McLaren's coffin, its side spray-painted with 'Too fast to live too young to die'. Finally, I could see the source of the noise I had been hearing, which till now had been muffled by the crowd. A dark green Routemaster bus hung with a giant poster in lurid pink and yellow with 'MM' initials brought up the tail of the procession. Blaring from the bus was music associated with McLaren, mainly the Sex Pistols. The bus passengers/mourners were hanging out of the windows, posturing punkishly and joyfully. T-shirts emblazoned with 'Cash From Chaos' were hung in the bus windows, price £45, and the bus passengers were flinging flyers from the roof - a final gesture of merchandising and exploitation. 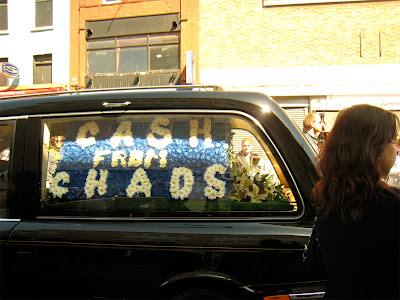 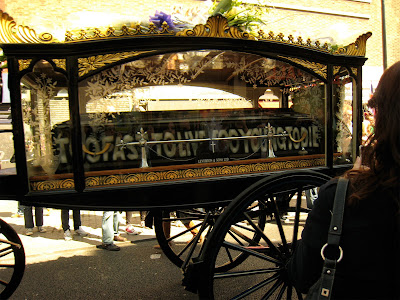 The long-time static and mournful crowd were suddenly animated and elated by the bus's arrival, and there was a tremendous scrum of press photographers and mourners all of whom were simultaneously leaping after it. I watched for a while. Then I thought, 'I came to follow the procession'; so I mounted my bike and pushed into the crowd, keeping sight of the back of the bus. I felt vindicated in my right to jostle - I had come to attend the funeral procession, it wasn't my fault if I knocked into people who were only there to report it; it was necessary to follow the bus. I had thought the bike would be a hindrance but now I saw it was an asset, amongst the thick of the crowd, giving me a vantage point and defence. The bus began to speed up and three or four rent-a punks (like those on London postcards) raced after it 'Take me with you!' one begged. They jumped on the back bumper and clung on as the bus gained speed, leaving Camden High Street behind. Were they paid actors, or just out of time? 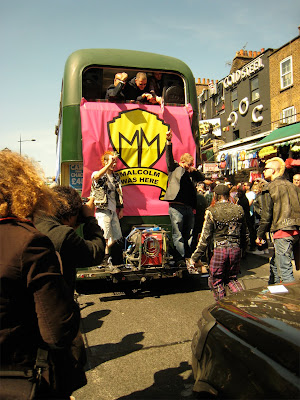 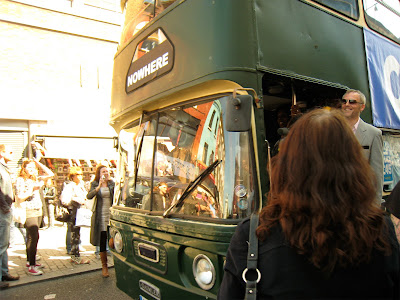 I was right behind the bus now and thought I'd just keep going. The photographers had thinned out; just a few stragglers running along remained, and as the bus accelerated those last few fell away. One of the punks vomitted profusely as we turned a corner; was it fake vomit? It projectiled so smoothly. A fleck caught my shoulder. The music from the bus created a mobile party and I joined in the ridiculous spectacle - three fake punks, three bearded men on Harley Davidsons, one old-punk on a bicycle, one puffing photographer on a bike, and me. Apart from the photographer cyclist we all semi-danced, cheered and sang as we pedalled furiously after the bus. The bus passengers looked on, dancing and singing and punk-gesticulating. The repertoire had progressed from 'C'mon Everybody' and 'Anarchy in the UK' on Camden High Street to 'Pretty Vacant' on Kentish Town Road, and 'Something Else' by the time of what was possibly Highgate Road, though my eyes being transfixed on the bus I had no real idea where I was. The distance seemed much further than I had thought it would be to Highgate Cemetery, perhaps because of a route I didn't know, or because of my focus on the bus. My lungs were filled with the fumes of the motorbikes and bus combined, and I was aware of my proximity to these much larger and heavier vehicles, which might potentially crush me, as we alternately stopped, weaved and sped. 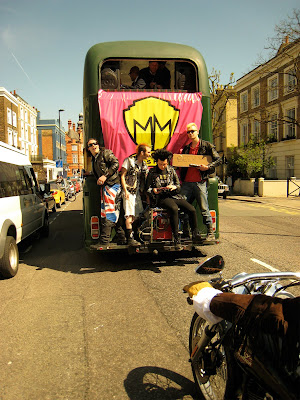 I had not expected when I set out that morning to follow the procession all the way to the cemetery; I had envisaged watching it pass, and perhaps walking alongside a little way, wheeling my bike - I was not prepared for this whirlwind madcap journey through North London. Yet I could not understand why there remained just this handful of mourners following the procession - surely committed fans would have made more effort or preparation to follow the procession? Why had they not all come on bicycle? It seemed to me an opportunity not to be missed - Malcolm McLaren was only going to die once. I felt I had to see it through to the end, a commitment to the route and the journey, however ludicrous and lured I felt or appeared. We arrived at the top of the hill and the leafy edge of Highgate cemetery. The bus stopped. I parked my bike on the ground and sat on a bench. The bus passengers must have disembarked and entered the cemetery for the funeral, but I didn't notice. I sat on the bench and reflected on the surprise and suddenness of my journey. Then I figured out my route back and cycled off down the hill. I passed by the empty horse-drawn hearse, waiting at another entrance/exit to the cemetery. I wondered what it was waiting for, as presumably the coffin had been buried. 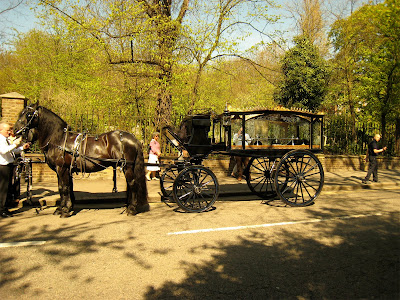